Van Cleef reaches an absolute milestone in his musical career. He redefines the broad spectrum possibilities of the usage of percussion and through his well developed way of playing, he reaches an unprecedented height. Traffic Jam is a splendid solo project. A just as fascinating as overwhelming musical product. 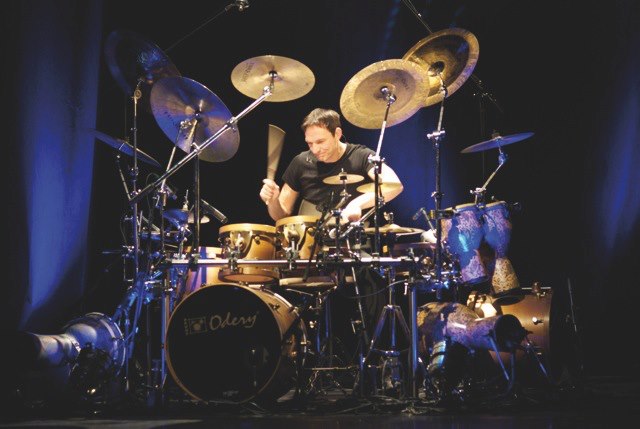 Marcel van Cleef is an extraordinary appearance in the world of music. At two years of age he picks up his first drumsticks: it was the beginning of an amazing musical career. At the age of 12 he made his appearance into the local music scene. Long before graduation from the Conservatory, he shared the stage with internationally acclaimed artists.

He finds himself in great need to add harmonics on top of the rhythmic component, so he is constantly in search of new sounds, roaming the world, to integrate harmonic structures in his rhythmical work. He combines percussion and pulsatile instruments: the result is the creation of an unprecedented versatility of sounds which at the same time enables him to sound like a four headed band while playing solo.

Using 8 foot pedals, which themselves trigger 2 bass-drums, 2 djembés, a woodblock and 2 hi-hats, he creates the base rhythm fundament of fine drum sounds. His arms handle tom-toms, djembés, congas, cymbals, udu, cajón, tambora and hangs. Combining these elements he delivers a set of raw and refined emotions and rattling fireworks. On the top of it all sound his comforting vocals. Van Cleef excels in making extremely complex arrangements sound open, fresh, and at times surprisingly simple. He adds an irresistible sense of humor to it.

It is almost beyond comprehension that the compositions on Traffic Jam are written and produces by just one man, the same man that performs solo live on stage. It is melodically sublime and rhythmically virtuos. Marcel van Cleef redefines the art of playing drums.

Van Cleef spatters energy and peaking musicality. His performances are impressive and touching; an ultimate challenge, a musical pinnacle and a tremendous source of inspiration to everyone who hears or sees him. Traffic Jam is a splendid solo project and a fascinating show: Brilliant!